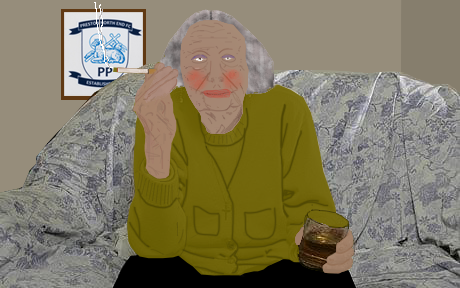 Having anticipated the ordinary boys, Preston were less ordinary and just a bit plain. Unfortunately, DEM BLADES were plainer; a potato waffle of a performance. I watched the 0-1 defeat and, unlike the beige, reconstructed potato flake snack, I refuse to waffle whilst analysing the holes in the match.

Instead of bemoaning another defeat, slagging off the players or disparaging the tactics, I thought it would be preferable to give credit to Preston who, after all, are one of this country’s oldest football clubs.

A cap-doff in the direction of P.N.E’s namesake, Mrs Lily White

As a rule, it is rare for football clubs to have a nickname that refers to a real-life person, but the Lily-Whites are the exception. Lily White, dead for some time, would’ve enjoyed her 117th birthday this weekend and P.N.E fans will tell you, she’s still a big part of the club.

As a person, Lily was known to all,  she carried warmth and goodness in the right-hand pocket of her pinny, and in her left-hand pocket, a 20 deck of Silk Cut. The famous P.N.E fan and owner of Lily White’s Launderette– with her streaky blue rinse and general smoky presence of fags- was truly a bacon of the community.

Many stories are told about Lily, some of them untrue and some of them inaccurate. She is the reason for the phrase ‘lily-livered’ and is thought to be the first person in the U.K to learn to suck eggs. She is also said to have rescued a man’s finger who had been bitten by a rat; Lily held her cigarette lighter under the rodent’s body until it felt itself cooking and unlocked its jaws.

The rat incident was just one of the reasons that the historic club decided to change their name from The Invincibles (which kind of wore off after they lost a few games) to the Lily-Whites. After setting the rat upon the chairman of the football club, Lily proceeded to find new ways to get what she wanted. Truthfully, the club was absolutely terrified of Lily and, after she demanded the nickname be changed to mirror that of her launderette, the chairman didn’t refuse (she’d stubbed a tab in his eye).

In return for using her name as the clubs moniker, Lily washed the football shirts for a five pence discount. When she retired Lily passed her launderette onto a ‘quite polite for a Chinese’ family (she was never one to mince her casual racism), but she continued to wash the kit in her flat. That all stopped on the day she passed away with peace and dignity, her two gerbils, leaving a legacy of baccy-stained football jerseys and a shit ton of Chubby Brown VHS tapes. Lily might be long dead, but her legacy will go on sale at Preston Carboot sale, this coming Saturday from eight in the morning.

The game kicked off at the traditional time of three o’clock and ended just before tea-time. Throughout the match, Chris Basham did some passes and four or five of them went to the feet of the player he intended the ball to go to. Then the same happened with the rest of the team, but sometimes it wasn’t Basham. Leon Clarke ran a bit. Carruthers did manage to move one foot after another to give the allusion of movement, but his efforts were in vain: we lost again.

Speaking to Radio Sheffield after the game, Chris Wilder had the cheek to suggest that DEM BLADES slump in form was due to himself, his staff and his players. I hope, like his opposite number in South Barnsley who regularly points out the flaws of referees, opposition players and even luck itself, he can begin to modernise his approach and blame any other fucker but ourselves. It’s a change that I would like to see happen sooner rather than later. In the meantime…