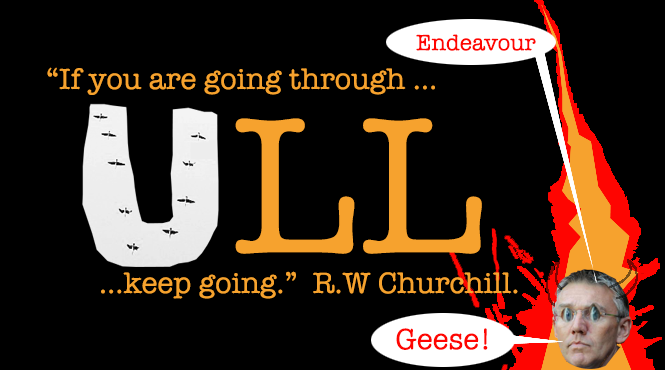 We all get things wrong. After an informal dinner with EU counterparts, David Davis described Rapprochement as being ‘absolutely delicious.’ There are gaps in everyone’s knowledge; until yesterday I never knew that A.F.C did not stand for are fucking crap – how could I have been so blind?

I believe it was Ray Winston Churchill who said if you are going through Ull, keep going. Unfortunately for DEM BLADES, the coach driver did not heed Churchill’s warning. Chris Wilder’s men entered the City of Culture and something must’ve happened because they arrived at the KCOM stadium with all the zeal and enthusiasm of students on a school trip to watch Slam Poetry performed by their peers.

Ice-T was the first artisté to use the phrase don’t hate the player, hate the game. How refreshing? Ice, now 60 and still nothing to do with Lipton’s, might’ve worded his lyrics differently had he found himself in a time-warp-cum-Groundhog-Day watching DEM BLADES under Neggy Nige. Adkin’s is the only man in recent years to truly master the art of making the players completely loathsome and, somehow, the game itself unwatchable.

Adkins fixes his hair into a 90s Quiff, fixes the camera with a look of David Brent and fixes Dean Hammond with twenty quid whenever he asks for it. The appearance of a smug middle management-type belies the reality of Adkin’s being a smug high-level management-type.  He is as clueless as any of them by using cliché or language that they themselves don’t fully understand to mask their own personal ineffectualness, but Adkin’s is paid the big bucks to do this.

…the midfield was a disgrace.

…the strikers didn’t do anything wrong.

…we couldn’t string one pass together.

…then we couldn’t string two passes together.

Thinking about Nigel Adkin’s telling his Ull side how well he thought they performed in ‘the arena’ is sickening. On Monday morning he’ll stand in front of his bored players with powerpoint slides, explaining something they all already know and understand, like a lecturer on a Leisure and Tourism course that every student regrets taking.

Here’s my bright idea: to re-energise the squad, Chris Wilder should them to train with Adkins for a week, confronting them with the geese, the endeavour, the arena, the pressure makes diamonds, the rooms for improvements. Becuase if they can’t motivate themselves to play for a playoff position, then maybe Adkins is what they need. Maybe.

I think it was I who said, “Coutts is actually a good player, this is all Adkins fault,” to a bloke in front. He vehemently disagreed and began to argue with me. For proving me, eternally, correct, there is only one man of the match: Coutts, there it is.