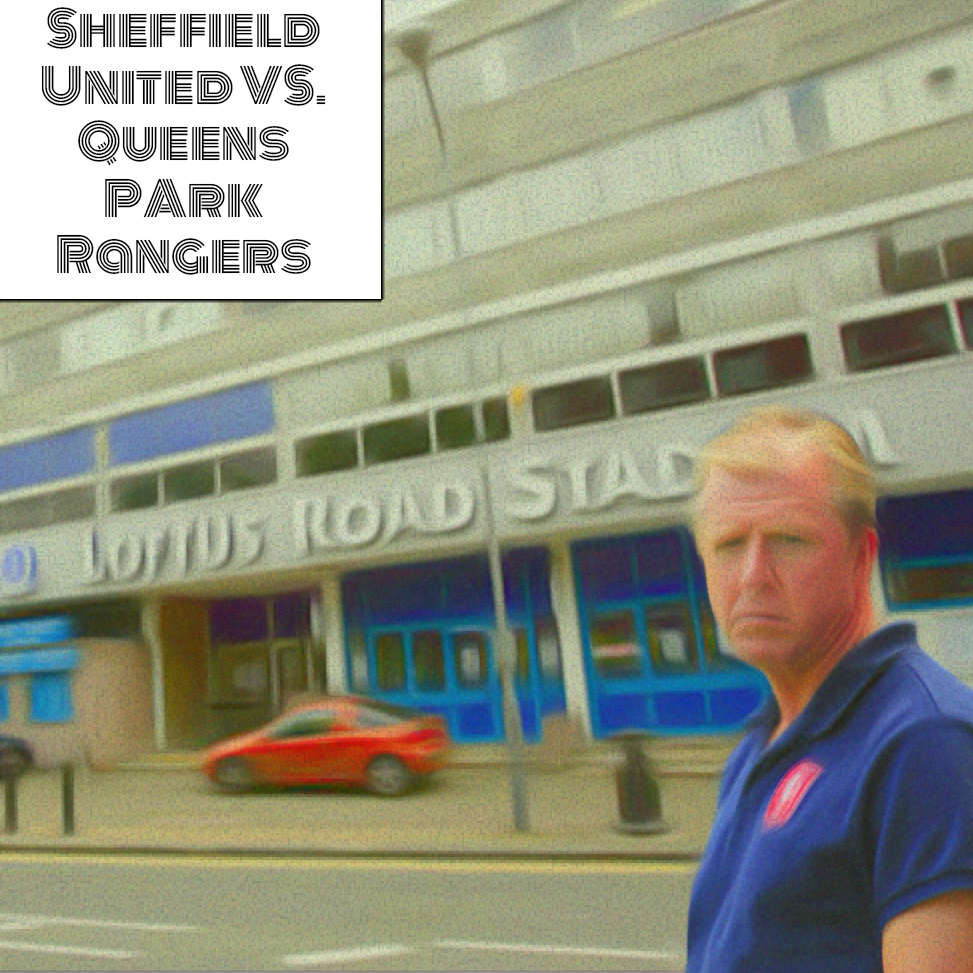 Look at’t Tate of that…

In a week where Boris Johnson made controversial comments about banning the burger and where Lee Evans left the Lane to swathes of ambivalence, I was busy opening my mind to accommodate meatier ideas about football and art. Would I have time to nip into the Tate before the match?

Yes, yes I would.

We all remember Shteve McLaren’s Dutch accent that he executed with no artistic merit as manager at FC Twente. The success-bereft Dutch impressionist has found himself another Championship job, at Queens Park Rangers, where he is tasked with joining the dots between a poor squad.

‘Maverick’ McClaren, as he insists everyone should call him, has been on a wayward spiral ever since he left his cushy number in the Netherland’s Eredivisie. In fact, his behaviour over the past few seasons has become desperately erratic:

Like his hero ‘Goughy’, such madness can only end badly…but how would it start?

It started, as usual, at 3 o’clock to the sound of the referee’s whistle. The Blades burst forward like paint from a tube, although their early attacks were erased by QPR’s attacking midfielders, who were ‘getting on the ball’ with increasing regularity.

My trip at the Tate began with a foray into the main gallery. Before I reached the door entrance proper, I was confronted with this description (left) and accompanying painting; a junction where all things took a turn for the ill…

As the half progressed, United didn’t. It was QPR who began to spray the ball across the canvass more and more easelly.  Eze, the QPR number 10, was a persistent and nagging danger. Unpredictable, like a Pollock. Our defenders had no idea what would come next.

What came next was two diamonds painted onto a black canvass, apparently with such mastery that this art piece could be sold for literally money. Imagine! They aren’t even good diamonds.

That shock was equalled, but not surpassed, by a QPR goal in the 29th minute scored by – you guessed it – Eze. And it was. He found the ball at his feet just inside the box and drilled a shot home. 1-0.

With minutes to go before halftime, the air was redolent with the smell of pricy hot dogs, almost leading me astray. United scored an equaliser that was as pretty as a picture and certainly prettier than Untitled 1963. Duffy executed a pinpoint through-ball to Freeman who drilled his pass across the face of goal, where Billy Sharp was there to meet it. 1-1.

As I entered the next room, I was greeted with the following warning:

Boy, was that warning justified!

A lobster-topped telephone accused pretentiousness at anybody who dared to take a second glance at it. As useful as a Blades corner, this ridiculous spectacle was marred by a lack of controversy; people just accepted it! To its credit, it was unique, unique like a Lee Evans tackle.

A tackling Lee Evan’s would not be present on the pitch for the second half (if he ever was) for reasons of geography, money and no doubt, a bit of anger. We did not miss him. Actually, Basham’s upenattem approach to all phases of the game added a bit of bite to our midfield.

It was effective. QPR maintained Maverick McLaren’s broad-brush plan: keep passing, side to side, occasionally lumping a diagonal, oh chuff it, give it to Eze… It had been an effective ploy in the first half, but it was proving less and less fruitful.

Fruit-full, people-full, animal-full: art should always have Lacking imagination a subject at its centre. Blue, for example, is not a subject. It’s a colour. Not my favourite colour either. Anger is how I felt. What is this bunkum?

However bad it was, it wasn’t as cringe-inducing as the smattering of Unitedites who booed, when David McGoldrick was brought on for Billy Sharp. It should be Clarke, they cried using more colourful words. This episode was made all the more toe-curling for the following events: McGoldrick came on, rose to head the ball at the back post, was shoved by the QPR defender, won a penalty and scored the penalty.

At 1-2, and with ten minutes to go, United looked as if they may need a pause button. The abattoir of late goals conceded looked more ominous and efficient the moment Maverick McClaren brought on the giant striker, Matt Smith.

Wall to wall junk. It’s the sort of thing you wish your kids never brought home from their art lessons, I said loudly amongst the bustling tourists in my head. This depiction (left) of a giant pause button, by Mark Rothko, is indicative of the sorts of crap that anyone with enough money will buy. Like Martin Waghorn or Sourdough.

United did not require a pause button. Painting themselves into a corner, QPR’s increasingly direct tactics presented the Blades with an opportunity to keep possession.  The five additional minutes of injury time was an exercise in keep-ball and shithousery, which keeper Dean Henderson relished no end.

In the face of defeat, it was all Maverick McClaren could do to take a sharp biro to his ear like some wild Dutch impressionist – it was the least Chris Wilder could do, to make no attempt to stop him.

Today, the Blades performed a decent impression of their former selves. I was taken aback by this awe-inspiring constellation. At its crux, the floating forward moves freely, characteristic of the 2017-18 attackem movement. The light hangs around this formation like rolling pins don’t, but there’s still a sense of invitation here. An invitation to the audience to feel, to feel stability, to feel confident, to feel that there is a wider purpose that binds these red and white striped coordinates together. The soft ripples that blur the shapes are done by the artist to present the fractured nature of stability and how it easily it can be lost and reformed.

Coutts was in the building; as is my excitement about his return.