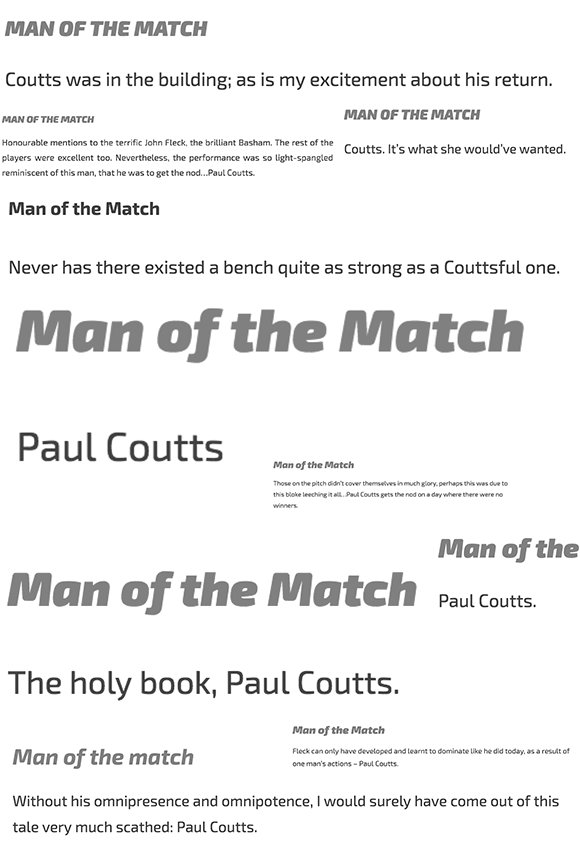 Couttsian – /’kuːtsɪən’
adjective
1. relating to or influenced by the nonchalant methods and all-around fucking godliness of Paul Alexander Coutts of this here Blades parish, especially with reference to the Rolls-Royce-like contributions he makes to anything he puts his hand to.

Even at two in the afternoon after a long short stretch at work in the morning, I had a feeling in my guts that had nothing to do with IBS. Just one of those feelings. You know?

That feeling carried me into the car with a flask of hot chocolate mixed with coffee under my arm (don’t moch me!). I started up the Cube and so began my journey to Ewood Park.

Slap bang in the middle of Lancashire and in the middle of nowhere, Blackburn is a place where people of Oswaldtwistle go to do their Big Shop. I pulled into a Car Park rated #7 on Tripadvisor for ‘things to do in Blackburn’, before finding a United-friendly pub ranked number #39. I sunk a couple of beers and basked in the frolicking of others, I am no singer but that makes me no less a Blade than the bloke on the table with a Dark Fruits and a hangover yet to come.

From the pub, I walked to the ground. Ewood Park formerly Wood Park but renamed for the digital age. I passed a shop with twenty television screens in the window, a violent waste of energy showing some deranged woman with a shackle around her neck dancing to ABBA like my Nan would if she had died already.

When I got to my seat I felt a prickle. Could this be the night? The game kicked-off at the advertised time and the Blades started strongly. With Couttsian assurance they kept hold of the football, playing it neatly across the back four and stifling down the opposition like old Etonians.

The Blades came close with fizzing shots from McGoldrick and Duffy. O’Connell too could have scored with a couple of headers from Norwood corners. Blackburn had their chances, if by chances you mean no chances. United, led from the front by the fat lad from Sheffield – Captain, Leader, Chicken Legend – went in at half time after picking apart their Lancastrian opponents like bony scraps of a KFC.

After the break of a KitKat, as well as the fifteen minutes between each half, the Blades came out with refreshed vigour…for three or four minutes. Then we were pegged back by an assertive Blackburn side who had not lost in 26 home games. Our defence HAD to be resolute, but they weren’t. They were O’Connell, Egan and Basham and that was enough.

We held firm. Stuck to our guns and despite being on the back foot, we found a way to win: striding forward was Duffy who passed it to Fleck with Couttsian ease, who took a touch and found McGoldrick in the left-hand side of the box with Couttsian vision, who played a perfect pass along the ground to Billy on the sport with Couttsian skill, who tapped home at the second attempt with Couttsian determination for 0-1 Blades.

When Blackburn were at their peak, we knocked them down to size like air from bread dough. After that Rovers, like their namesake, looked look dog tired. They would need a miracle to get themselves out of it and miracles do indeed happen. If not miracles, at least small moments of magic. Kodak moments of magic. That prickle again. And then an announcement…

He’s there on the touchline. Eleven months later. He’s there. Back. Bold as brass. When he left, we were top of the league and with this result…

What did I say about not being a singer? “His second name is Couttsy,” (even though it’s not)…

And then…Coutts. There. It Is.

He’s back. It’s a surreal moment, almost as if your favourite United player has been missing for some time only to return….oh wait. Immediately he’s involved and playing neat one-twos with Fleck and Norwood in tight trangles like nothing ever happened.

In the midst of the Couttsphoria, Enda Stevens (who deserves some credit for recent performances, but I’m sure he has a contract phone) curled in a cross with Couttsian whip. It hung in the air for just a second before Billy was at it again. A downward header this time went beyond the anti-Couttsian keeper for 0-2 Blades.

The final fifteen minutes was a passionate blur of red, white and black. Fans were delirious at the result, Coutts-drunk and hot with happiness that his lordship was back. The resurrection, eh? Well, at least that word minus the res.