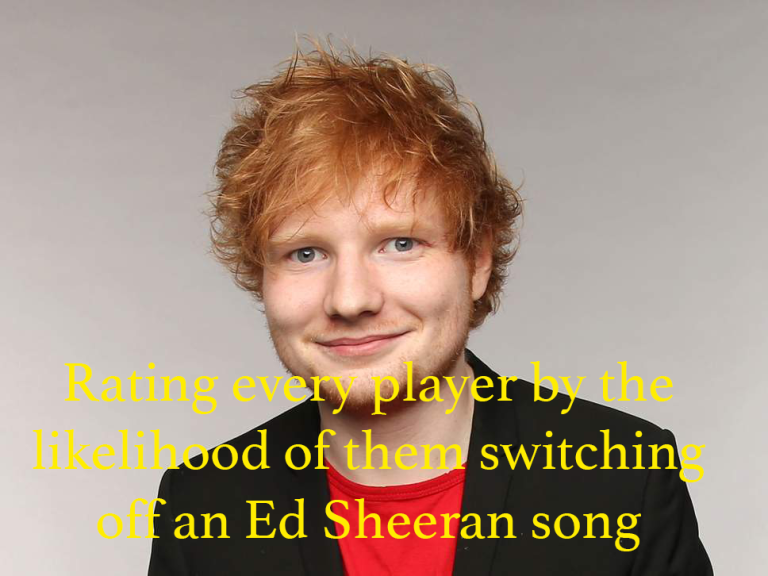 Chris Wilder doesn’t listen to music, music listens to him. If ever the tones of Ed Sheeran fills a void with sound, Chris explains to those sound waves, firmly but politely, that they might as well stand under the wheel of the team bus.

Right, Alan. Alan would never choose to listen to Ed Sheeran and although he seems to much of a top bloke to turn the track off, he has a dark side. Deep down in his well-considered and respectful cognition, a small fire burns at the sound of crap pop and samey 4×4 bars. Whatever happened to Led Zep?

Perhaps one day the fire will rage in an explosive rant at Dean Henderson but I doubt it would be over Ed Sheeran. Kanye West perhaps…watch this space.

Deano doesn’t turn off other folks tunes. He learns the words and sings along whether or not he thinks the track is ‘gash mate.’ Listen, he ain’t gonna video himself doing a Sheeran Singalong, although he might film one of his teammates and stick on Insta.
2 George Baldock

George Baldock does top Instagrams too and I can’t imagine a moment where a snap of the fellas dancing around to Ginger Ed wouldn’t go amiss. I think Georgy would embrace the track inf anything.

“Turn the bastard off,” bellows Enda Stevens.  Not only does the Irish wing-back have a negative disposition to the circularity of pop in postmodernity and the broader slaughterhouse of Music Today, but he also reserves additional vitriolic disdain for Ed Sheeran and, in particular, his song ‘Galway Girl’.

From the first lyric – “She played the fiddle in an Irish band” – it’s vacuous folkisms that poke a jibing finger in the eye of Irish Culture, the song is a clusterfuck of tropes that would if aimed at culture or nation of colour, be considered something close to racist.
4 John Fleck

You’d be mistaken if you thought John Fleck listened to music. He doesn’t. He sits on the team coach watching videos of the current Scottish National Team on loop, crying with despair at the farcical nature of his own lack of inclusion.

Sometimes he sees players that he has recently played against: Charlie Mulgrew, John McGinn…he ticks them off in his head and wonders what he has done wrong. He takes out a headphone and hears Ed Sheeran blaring, he puts his headphone back in.

And when he hears a Sheeran tune,  he says ‘turn off that twat.’

Chris Basham would turn Sheeran off. Right, Bash doesn’t hate the tunes, but he has experience on his side and he’s heard crap like this before. He never went in for Justin Timberlake in the early noughties, he was more of an Electric Six fan. The other lads think Bash is a top bloke too, so if he says “turn this shit off like lads,” they listen. Simples.

Lundstram’s a lover. Don’t get me wrong, he’d rather have a bit of George Ezra but if Ed’s playing Lunny’s slaying. “Don’t turn it off,” he says sheepishly to John Egan, before realising it is better for everyone’s safety if they listen to nothing at all.

Cool, calm, collected, Leon is not. He hears a single bar and he rages, turning into a pop-eyed monster of fury who is ready to slay anybody unprepared to adhere to his wishes. “What even is this?” He asks, horrified by the simplicity with which some of his colleagues have been taken up. “That’s like an acoustic night at the pub shit.”

He’s quite embarrassed by it, but our Bill doesn’t mind a bit of Ed. In fact, he’s not embarrassed at all. He’s out and proud.

He knows the words to A-Team and is said to be ‘somewhat relaxed’ about claims that he’s spent over £40 on an Ed Sheeran-autographed photo that sits next to his signed picture of Keith Edwards and Brian Deane in his man cave.

Like Enda, Egan despises the cultural appropriations that Ed Sheeran has undertaken for the sake of the swelling of his own purse strings. You have to be careful that Sheeran doesn’t come on the wireless because there’s no telling what John Egan might do.

SMACK. Egan stuck his head straight through Billy Sharp’s laptop, through which the tune had been playing. How else do you think JE got that bandage around his head?

I’m in love with the Shape of Coutts but I have a horrible feeling, and I feel sick to admit this, that he doesn’t mind a bit of the Ginger Singer.

Anybody who passes like this fella can smoothly and succinctly tell his fellow Blades to turn it off without offending anybody.
17 David McGoldrick

Didsy has style and is said to rate Sheeran as ‘the Tracy Beaker’ of pop. Nobody knows what he means by this but his teammates, so overwhelmed by his all-around steeziness, just accept this as cool thing to say. You can understand why when this Nottingham-born striker throws mad shapes on the pitch and then, off it, dons the sickest clothes ever bought from Thoresby Market.
18 Kieron Freeman

Nobody called Free-Man is going to leave that snivelling shitbag to drone on. Not if he can help it. Given the choice, he’d turn it straight off. However, KF prefers to stick on his Beats by Deirdre and turn up the bass…

Mo Stack, Lethal Bizzle, Lil Durk that’s who he’ll be playing…and I rate that. Listen, I’m sure he humours Billy and Couttsy when the Shape of You Ft  Stormzy comes on, but deep down he knows the guy is whack.
19 Richard Stearman

“What’s this rubbish?” Stearman would say with a joking sneer that comes from years of listening to Travis, Oasis and the Verve. But ultimately he lets the Young Uns and the Embarrassing Dads keep their ginger hero on.

He takes the mantle of Indie Blade, the player that other players turn to after a defeat for the depressing Spotify choice, a Bittersweet Symphony for example. He occasionally bonds with Kieron Freeman over a bit of Jamie T, the bond between indie riffs and urban bass beats. But he can mostly be found at the front of the bus weeping strumming along to the Kooks. He’s so naive.

He may have killed someone’s bounce but Mark Duffy himself bounces along to Red Ed like pre-September Pig. Alright, that

Johnson rolls like Kieron Freeman does. Big headphones in. Let the tasteless choices of the rest of ’em play on whilst I enjoy a light hour of Gangsta Rap.

Daniel Lafferty would turn it off, in solidarity with his Irish brothers, but also because “he’s the single most talentless artist of the last decade.”

He doesn’t want to piss off the captain so he pretends to Billy that he likes Ed Sheeran. Sometimes Sharp gives him a lift to the training ground and, just to humour him, Simon says ‘stick that Ed Sheeran album on.’ One day he’ll have the guts to tell him what he really thinks, but he’s waiting for the opportune moment.
31 Jake Eastwood

Jake Eastwood is so young he doesn’t even know who Ed Sheeran is. Instead of turning it off he just sits there, baffled by the idea that anybody, anywhere could make the decision to listen to this for enjoyments’ sake.